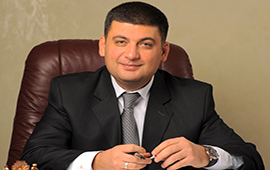 Government at a meeting on Wednesday decided to introduce a single customs windows and overcoming the so-called Mafia throat that will ensure transparency of Ukrainian customs. The Prime Minister of Ukraine Vladimir Groisman, opening the Government sitting on Wednesday, 25 May.

“There is the establishment of a single customs window. This will mean that we completely systematize customs procedures, no one will be abused 50 times to check the same export”, – said Vladimir Groisman, commenting on the meeting agenda.

The Government made a decision that will put an end to the so-called Mafia nutty, limiting the period for inspecting the vehicle with nuts aimed for export, said the Prime Minister. “The solution that we approve today, will regulate this check – four hours. Four hours – checked if did not have time – goodbye, acquiescence, transport has to go to customs,” – he said.
In addition, from August 1 will introduce a special procedure care goods at customs to be given according to the risk management system, said Vladimir Groisman. According to him, from August clearance will take place in the photo and video fixation and several customs that minimizes risks.

Also, the Government planned technical upgrading and modernization of customs, including the installation of scanners and update personnel will “introduce new approaches to customs control, – said Vladimir Groisman.

“It will give us tens of billions of the state budget and give an opportunity to develop competitive domestic manufacturer. This is one of our priorities. Then all that will earn economics, will be directed to developing countries and ensure effective social policy. This is our problem with you, “- he said.

The Prime Minister said that the Government has set the State Service of Ukraine fiscal task to bring order to the Ukrainian customs, “in order to commodities that pass the border in Ukraine and Ukraine, were completely qualitatively all procedures and all customs fees that are required by paid to the state budget. this budget sector salaries, pensions, rather, cover the deficit of the Pension fund, a lot of other areas that allow us to develop the infrastructure to become volatile state. “

Vladimir Groisman said that today’s Ukrainian customs there is large-scale corruption and ineffective system of control the passage of goods, bringing losses to national economy and destroys the possibility of domestic producers, and most importantly – any smuggled goods that enter the market of Ukraine, destroying the possibility of domestic producers, job creation and further establishes us as a country with resource economy, which is unacceptable, “- he stressed.

“It is important that light import-export passed in and out of Ukraine without any obstacles and smugglers or changed country of residence or his family occupation. It is essential,” – said the Prime Minister.

The Prime Minister noted that Ukrainian customs reform will contribute to the development of the national economy, which is a challenge and a priority of the Government, “We need to build a strong economy and a strong build effective social policy. All the needs that exist in other areas of life, ranging from defense and ending with issues of culture depend on how to develop the national economy “, – he said.